The boy looked up at her. Looked up at the girl hanging from the mango tree in his backyard. Her red hair hung and brushed the ground covered with dirt, pebbles and leaves. He had never seen her before and she did not seem the least bit interested in him. Her eyes stared unseeing at the bark of the tree. Dark eyes pooling themselves into tunnels that told a story the boy knew he would never know.

He moved from the spot where he had been rooted for more than a half hour and traced a semi-circle in the dirt slowly around the girl’s upper body. She wore an ordinary t-shirt, with ordinary jeans, but there was something extraordinary about her. The boy could feel it. He knew it was there, but he could not put his finger on exactly what it was.

“Is this your tree?” The boy was startled. The girl had asked him this, swinging her body to and fro in a pendulum-like motion that made him feel slightly sick. She still did not look at him, gaining momentum as she awaited his answer. He gave it to her, wiping away the bead of sweat that had formed in the hot sun.

“Yes, it’s my tree,” then boastfully he added, “I climb it nearly every day, almost to the top too.” The swinging of the girl’s body had increased dramatically as he spoke and the boy felt he should warn her each time she came dangerously close to colliding face first with the tree’s trunk. In the end he had to say nothing, because she spoke instead.

“Do you?” In seconds the girl raised herself and with cat-like agility sprinted to the upper most branches of the tree, barely pausing as she went. She peered down at the boy, a startled dot below her. She shouted down to him, her voice travelling in rivulets to his ears. “It looks much further when you’re at the bottom.” The boy shivered looking up at her. He had never gone that far before. He had never gotten past the middle of the tree. Never tried; his mother would have had his hide and to be honest, he’d never wanted to. For a boy of ten, the climb looked like a means of suicide. The girl had not stopped looking at him and now a sardonic smile spread across her face. “You’re afraid.”

“I am not.” His response came quickly. Came before he could think of the consequences of such a retort. This would mean he would have to do it now. If he didn’t, he would appear like some frightened baby to this female who had so effortlessly gotten to the top. Though he was very young, the boy already understood the implications if he did not follow through, not just for himself, but his gender. With his options thoroughly weighed, he took a single breath and held onto the first branch.

This one was familiar. He was accustomed to the first few branches, they were usually as far as he got. He paused next and smelt the sour smell of a mango that had been picked at by birds and left to rot in the heat. He looked up at the girl and saw for the first time that she was barefoot. This would have made it more difficult on the smooth branches. It made him conscious of his own feet pushed into rubber slippers and he kicked them off carefully, watching them fall to the ground below. If she could do it then so would he.

As he started to tread into unfamiliar territory his pace slowed down considerably. The boy could feel the wind changing as he did. It was so in this his island home, one moment it was too hot to stand it and the next the rains came in unforgivable torrents. He wanted to hurry, knowing it was dangerous to be caught in a tree at this height, in the rain, but he could not. He trudged on, thinking he could hear the girl’s breathing, her silent laughter, but each time he looked up at her she only stared. Stared down at him, waiting for him to join her.

Dark clouds had begun to spread across the sky and the sun struggled against them. The wind picked up and the boy felt his shirt whip around his waist with a particularly high gale. The boy had always thought it was stupid to go so high, where the branches became thinner and less likely to hold his weight. He knew he should stop, knew that if his mother saw him it would be the end, but his pride wouldn’t let him. He had to prove to the girl that he was not afraid.

So he continued, branch after branch, suffering lashes from leaves and twigs across his face and any other uncovered skin as he fought his way to the top. He looked up, realised that he was only a few branches away from the summit and he would soon be able to touch the girl’s leg. He smiled triumphantly and sought out the next branch, then, it started. It was nothing but a drizzle at first. Bare wisps of water sprinkling his arms. That did not last long. Soon the rain fell hard, coming crashing down on the boys small frame. He held on in fright as his stomach lurched at the real possibility of falling. He dared to look down and was rewarded with a muddy view seemingly so far away that he clutched hold of his branch tighter than before. Above the downpour, he heard the girls’ voice.

“You said this is your tree,” the boy looked up at her as she paused, her face turned upwards allowing the water to flood her countenance. As she looked back at him, her hair stuck to the sides of her face, covering her ears, she spoke again. “If this is your tree, come on, claim it.” The boy did not know what possessed him. Maybe something in the way she said it; in the way her voice rang out over the element. Something made him reach up and grab the next branch. He let his hand settle on the wood pretending to check its stability. He was really pulling together the courage he needed to continue. With a heave he hoisted himself up. The branches were getting shorter and the boy was thankful that he was not heavier. He could see the roof of his house from this vantage point. Knew he had but a few more branches to go.

The boy took another step up, clinging precariously to a particularly thin branch. His feet slid and he felt his heart flutter involuntarily. His palms hurt from his tight grip and his arms were cold and stiff. The rain continued to fall, torrents blinding him to his progress and the boy found himself feeling for the last branches more so than actually seeing them.

His hand reached up again, feeling nothing but thin twig like sticks. He opened his eyes. Looked around him. The girl was next to him, her clothes clung to her as did his and he saw that she had pushed her hair away from her face. The rain slowed, slowed to a light drizzle until it stopped. The girl spoke, her voice low as she did. 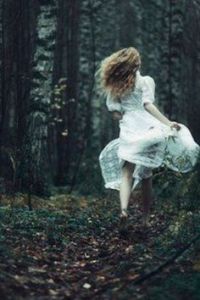 “Now, it really is your tree.” With that she released the branch. The boy shouted out, knowing that she could not survive the fall. The girl seemed to float to the muddy ground and somersaulted in the air landing without effort on her feet. Then she ran. Ran so quickly that if the boy had not been watching her, he might have missed it. Would have missed her fling herself casually over the galvanise fence of his backyard and disappear.

“Marcus! Where are you?” The boy could hear his mother. He could hear her calling to him in the tone she used when she was beyond angry. She hated him out in the rain and there he was, not only in the rain, but at the top of the mango tree too. He carefully made his descent. The branches were quickly drying in the sun that had reappeared, but Marcus knew it wouldn’t last long. There were new dark clouds building on the horizon.

He knew that what had just happened to him was not normal. Instinctively he was also aware that no one would believe him if he told them about the red-haired girl. He would take his beating, the punishment that he knew would come when his mother realised where he had just come from. He would brag to all the boys about how he had made it to the top of the mango tree at school the next day. He would dare them to try it. Dare them to climb his tree.

Continue Collection
Back to Your Readers’ Vault

Coffee? ☕😊
Happy New Year everyone 🎊🎉🥂! For the beautiful times and the challenging ones, I wish you the strength, love, and determination to walk your path in a way that best serves you and the life you want to create 🙂💐.
Babushka Jones and Old Man Michels. Snow didn't agree with us here jeez 😂🤣.
😊🎄🎁🎉 #HappyHolidays #MerryChristmas
🇧🇧🎉💖.
It's #IndependenceDay in #Barbados so last night I went a little ham making small portions of things I'd have at home. It started with a list, then I used what I had on hand to execute. Ended up with: Black Rice and Lamb Stew, Macaroni Pie, Souse, Fried and Baked Chicken, Baked Ham, Bread Pudding, and Salads.

Author and promoter of science fiction