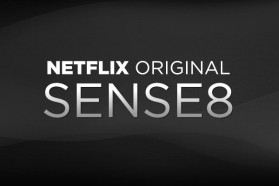 I absolutely adore this show! I’m usually pretty plugged in when it comes to Netflix originals, as they’ve had real hits in my opinion e. g: Hemlock Grove and House of Cards. However, my views on their newest series Sense8 (brought to viewers by the Wachowskis), has nothing to do with bias – the show’s just pretty wonderful.

I hadn’t seen any trailers, or read anything about it so was a series’ virgin when I

started watching. Immediately it reminded me a bit of my book ‘Awakening (When Worlds End Trilogy, Book 1)’ mainly because of the characters’ abilities to be transported to various places at the drop of a hat and because they’re only just discovering these abilities. However, as it’s set only on Earth (Awakening’s across planets), it was really great to see so many cultures condensed into one show. I love that kind of thing, especially as the world is so big and full of so many possible influences. Back to the actual series…

Sense8 introduces a different kind of human, genetically foreign in a way that allows them to link with others of their kind and in turn be able to live, breathe and experience all the others can. As there are, in summary, one person living eight lives, they’re able to take on the traits and abilities of the others and in turn escape some sticky and life-threatening situations, by giving their selves over to the one possessing the necessary skill. The 8 who viewers follow are called a cluster and it’s great to watch as each individual learns about what they really are. Additionally, shielding themselves from a gentleman known as “Mr. Whispers” (Terrance Mann), whose intent to harm the members, keeps the cluster constantly on their toes. Ironically enough the prevalent theme throughout is love and relationships, which isn’t usually my thing but it’s so well done,

that even I find the chemistry between the characters hard to resist. The same can be said for the glaring stereotypes implemented as viewers go from country to country, I did not feel hit over the head by them as is the case in some other shows.

I could gush and go on about the finer points Netflix win, but instead I’ll share about the amazing cast: Brian J. Smith as “Will” — the full-of-feels cop and my new ‘TV yums’ ha; Doona Bae as “Sun” – the seriously bad-ass executive; Max Riemelt as “Wolfgang” — in summary, do not f**k with this guy; Tina Desae as “Kala” – the sweet and willful girl-next-door; Jamie Clayton as Nomi – the transgender chick that swears she’s going mad; Aml Ameen as Capheus — the bright spot on your bleakest days;

Tuppence Middleton as “Riley” – way more to her story than meets the eye; Miguel Ángel Silvestre as Lito – the gay actor trying to hide this truth from the public. The supporting cast are incredible too and I wondered how long casting took as for the first time in a while nearly all the characters are on my favourites lists for different reasons.

Note: I wouldn’t usually point out the gay and transgender character points, but there are integral parts of both these characters’ stories and aid in the show’s progression.

Whether you’re a fan of sci-fi type shows or not, this series is about people and the influence our actions can have on the lives of others. I can’t say much else but — watch ^_^.

1) Being a very busy bee. A late friend of mine used to have his feet and hands in all kind of pots as a way to continually push and progress the goals he wanted for himself. In the last months I’ve come to understand this thinking more and more. So writing, editing, freelancing have all been a part of my days in the last week. I’m tired as heck, but it’s worth it ^_^.

One thought on “Friday Highlights 141!”