The thudding of Ren’s head against the car window as she slept was unsettling. It wasn’t actually audible, but each time we ventured over one of the numerous bumps in the road, I imagined I could hear it. Sasha’s voice interrupted my strange reverie,

“Is that it?” she asked from the front passenger seat as we drove past the first sign for miles. We had been trying to find an abandoned barn for the last hour and so far had come up empty. It was supposed to be the site for the biggest underground party that month and there was no way we were going to miss it. At least, that’s what we’d thought half hour before, somewhere around the time we’d left civilisation far behind.

“The sign said Martin’s Bend, that’s the one isn’t it?” Matthew asked anyone who was paying attention. He was the driver for the night and finding it more and more difficult to rely on our navigational skills.

“Better turn back and make sure,” I said now, sneaking another glance at Ren. Thud, her head went as Matthew made a sharp turn on the empty road.

“Yea, it’s here,” Sasha said excitedly, “I don’t see any lights or anything though.”

“So do you want me to turn?” Matthew asked.  I leaned forward, inspecting the sign closer. It was old, crooked and covered with moss.

“Yea, we can try at least, maybe it’s further in,” Sasha said with less confidence and I could tell that she too was a bit put off by the sign’s appearance. Matthew complied.

Seconds later we were on a dirt path, walled in by bushes. A closed gate loomed ahead and something inside me went cold. Immediately I knew we needed to get out of here.

“Let’s not do this guys, every single movie I’ve seen says that we die out here if we go on.” Nervous laughter from the two up front; the car inched forward.

“Maybe we have to ring a bell or something at the gate?” Sasha asked the air.

“I don’t see a house, or anything else behind that gate, so I don’t think that’ll work,” Matthew responded, still driving forward. A thought occurred to me,

“All this bush, yet the path is totally clear. It’s obviously used pretty often.” I shivered involuntarily, “Guys, let’s go, let’s just turn around and go.” I looked over at Ren, who still did not stir. I had no clue how she was staying asleep through all of this. 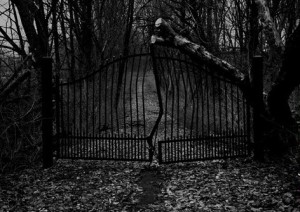 “I don’t get it, the directions in the text said it should be here. Head up to the gate Matthew, just to be sure,” Sasha said, her voice quieter than before. She rolled her window up, though I doubt she even realised she’d done so.  The car came to a stop in front of the gate, which had horses with evil red eyes carved into it.  Beyond that were just shadows, created by the headlights shining into the bleak darkness. My apprehension grew as Sasha read the notice hanging from the gate,

“Enter at your own risk,” she said, barely above a whisper.

“Okay, I’m turning around,” Matthew said a little too loudly, obviously trying to abate his own discomfort. I sighed with relief and listened as the two chatted about who could own the place and what was really behind the gate. Matthew was just about to make the final turn on the small pathway, when a man came to stand at his door. On his head was a rubber fisherman’s hat and his nearly toothless grin was eerie in the dim light. In his hand he held a wooden mallet.

“Do you not read signs?” He asked as we looked at him almost too shocked to move. From the fog of fear that was threatening to grab hold of me completely, I heard another voice,

2 thoughts on “Random Wednesdays: Journey To The End Of The Path”