“Why are you crying and on such a pretty night?” John asked his daughter Lilly, concern etched on his face.

“Santa’s dead,” she mumbled through tears. John bent low, his aim to comfort her,

“He’s not dead little one, you wait and see, there will be tons of presents under the tree come Christmas morning.” The girl sniffed, wiped her face and eyed her father uncertainly. 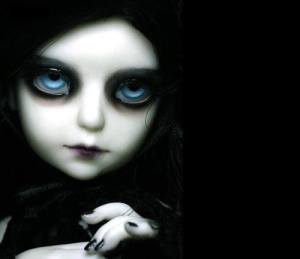 “Come now child, everything is all right, Santa will come and . . .” he stopped as she pulled away, her blue eyes looking up at him earnestly,

“Santa won’t come, there’s no way he can.” John frowned, not sure what to make of it all. He stood, contemplating calling his wife, surely she’d have better luck comforting the girl.

“Why are you saying that, you don’t want Santa to think you’re a bad girl do you?” He thought the joke would work, but it didn’t, the little girl remained stone-faced. She extended her arm, pointing in the direction of the other room.

“He’s dead daddy, just there.” John followed her gaze, spying an unfamiliar black boot attached to a body that was swallowed up by the darkness of the room. John gulped hard,

“Run upstairs to mummy quickly,” he whispered to her urgently, “Tell her to call the police.” His daughter didn’t run though, instead she came to stand in front of him, smiling now, though her cheeks remained tear-streaked.

“I can’t daddy, mummy’s dead too,” she said, way too calmly.

“What . . . what are you talking about?” John asked, somehow sure he didn’t really want to know.

“Santa and mummy were being bad to you daddy, I had to make them stop.” John sank to the floor, the realisation of what had happened finally sinking in. Lilly sat beside him, holding his hand.